You Are Here: Home/Top 5 Git Commands For Experienced Developers

Most applications cannot be successfully developed by one person - they usually require the collaboration of multiple developers working on and sharing the same code.

To make development easier and more robust - a version control system is needed that keeps track of all changes made by team members, even if some of them work with the same files.

Mastering Git commands is a must for successful collaboration and code delivery.

Today, we'll learn the 5 most important Git commands that every experienced developer should know.

This command is extremely useful for applying the changes from the particular commit by creating a new commit on the active branch.

Imagine you are working with a component that displays a formatted date.

The component is ready, but it uses the native Date object in JavaScript:

Suddenly you realize that someone in your team has just added a date handling library, say dayjs, and created a nice service that can be used in your component.

The code is not yet included in the main branch, it is still hanging in Github as Pull Request, but has been approved by your colleagues.

You can either wait for it to be merged, but what if the author is out of the office?

That's when cherry-pick comes into play.

Find the commit that adds the date handling service: 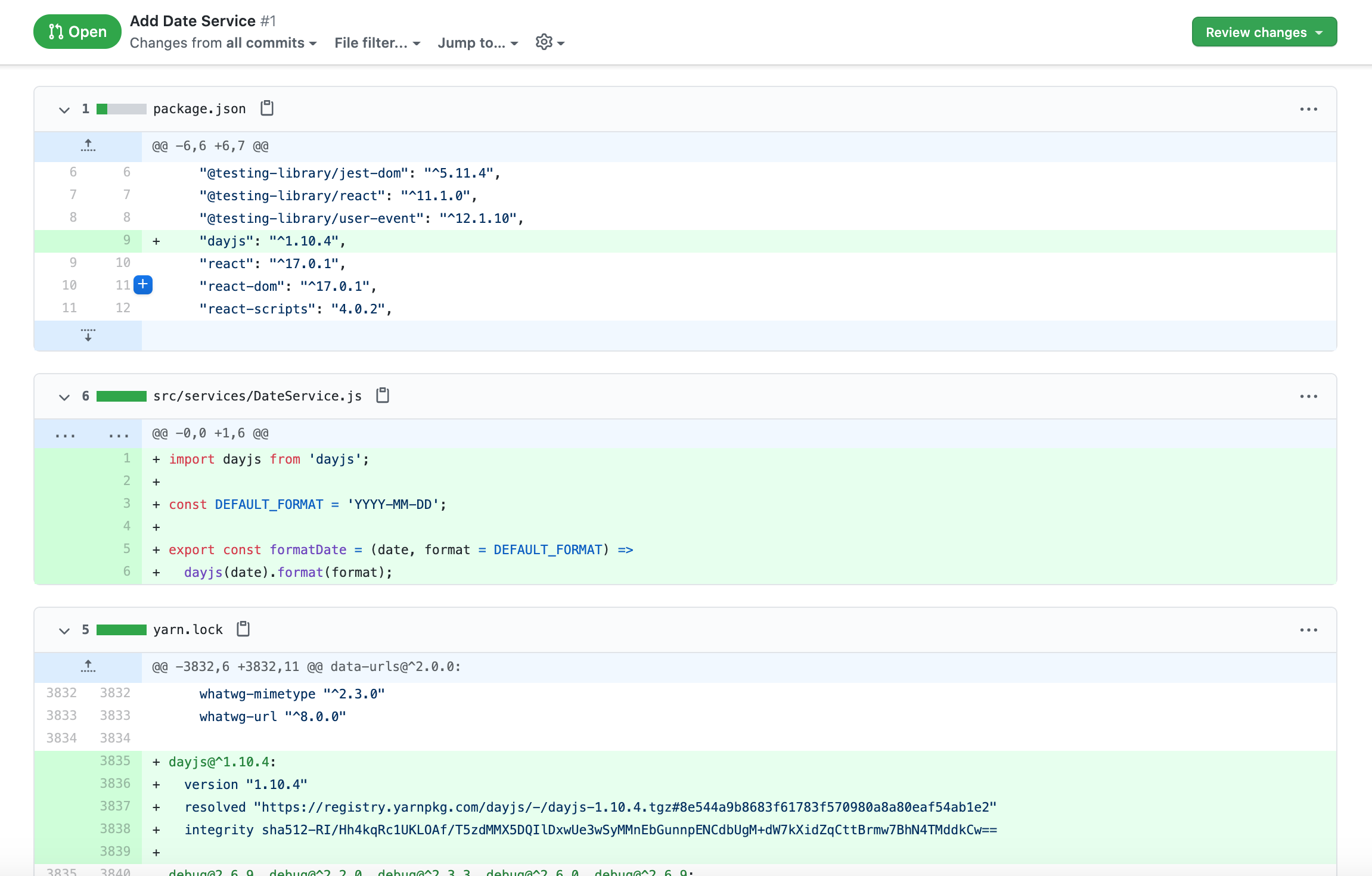 Copy its hash (from the URL), navigate to the terminal, and run the following command:

See that the command completed successfully:

The changes are applied and can be used immediately:

This command allows the current branch to be reset to the specific commit. 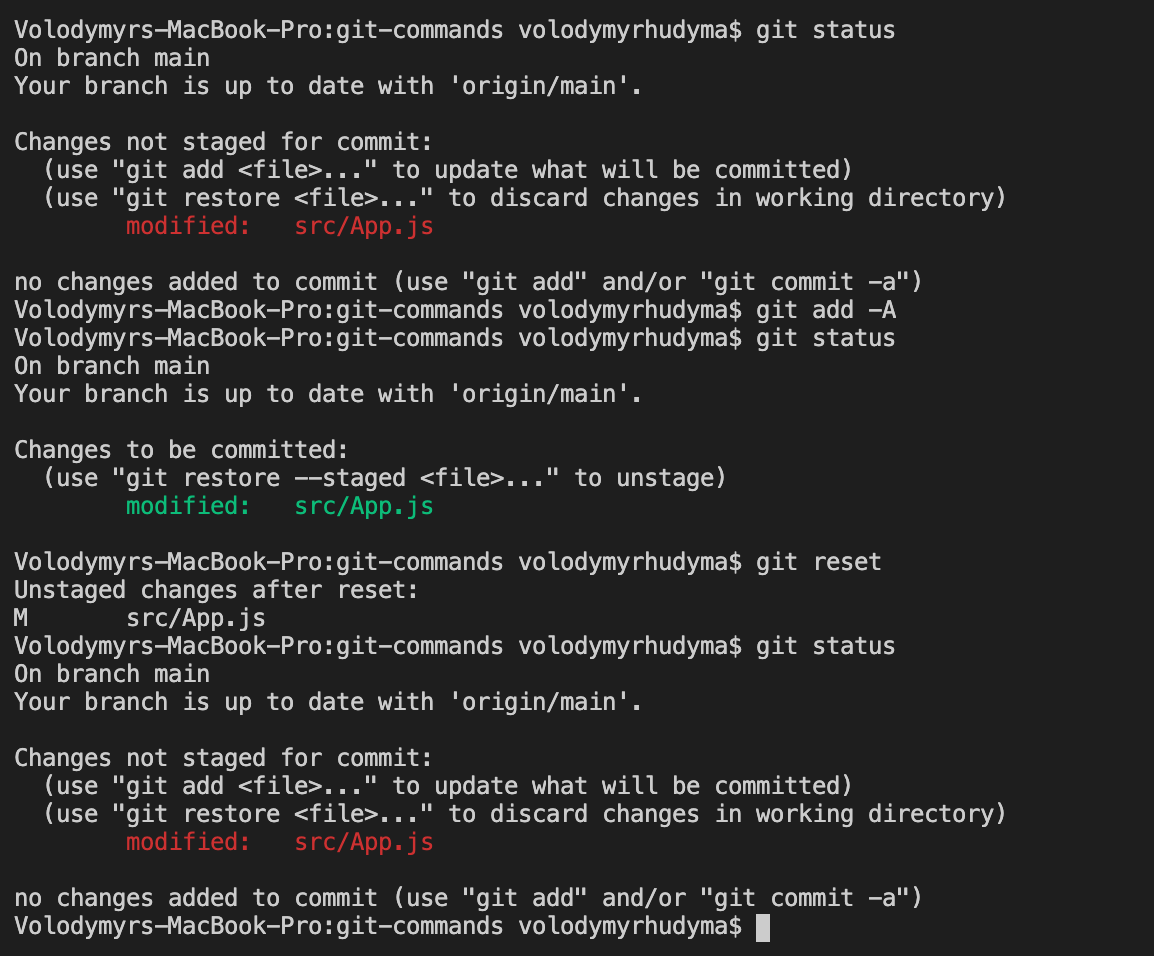 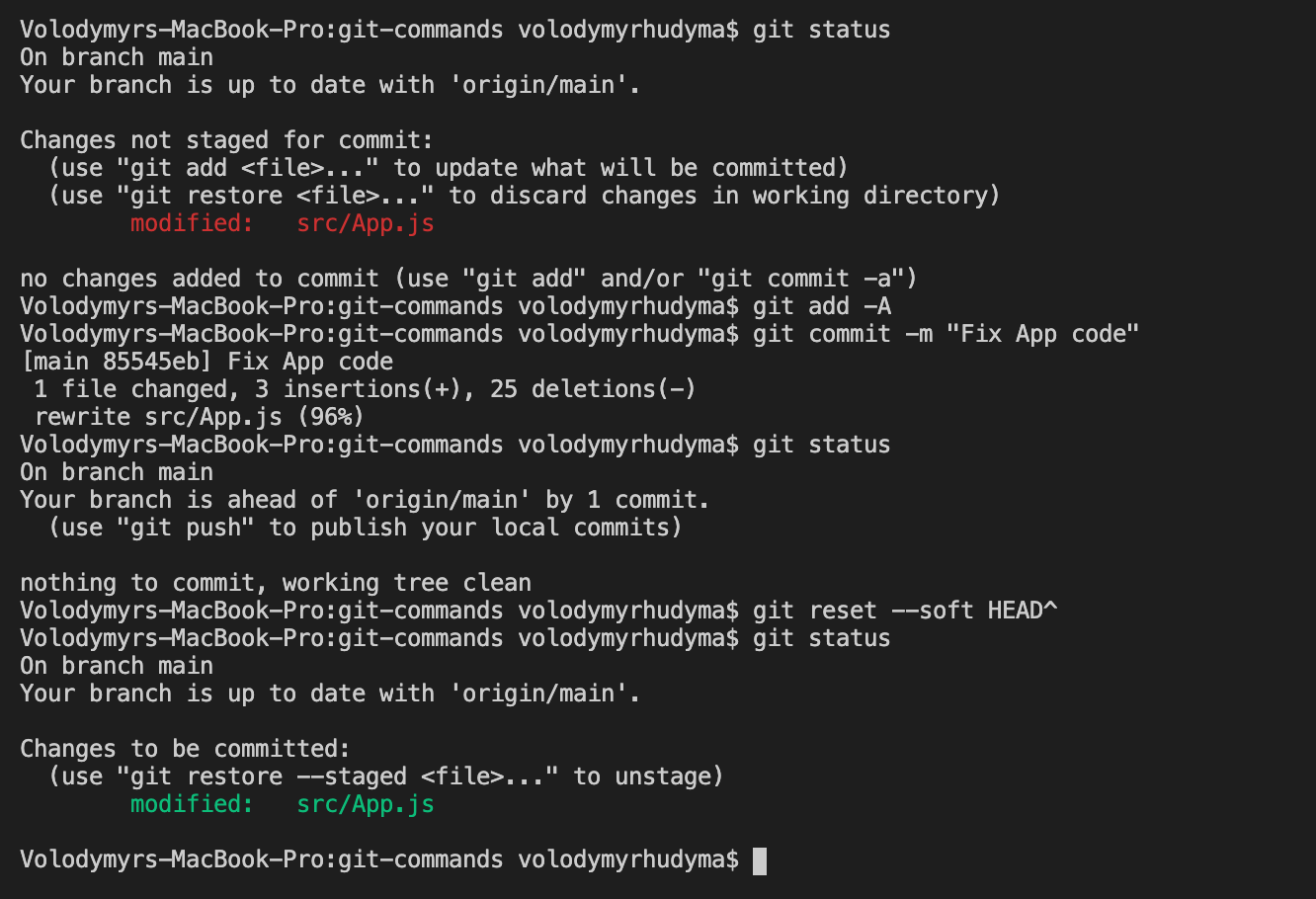 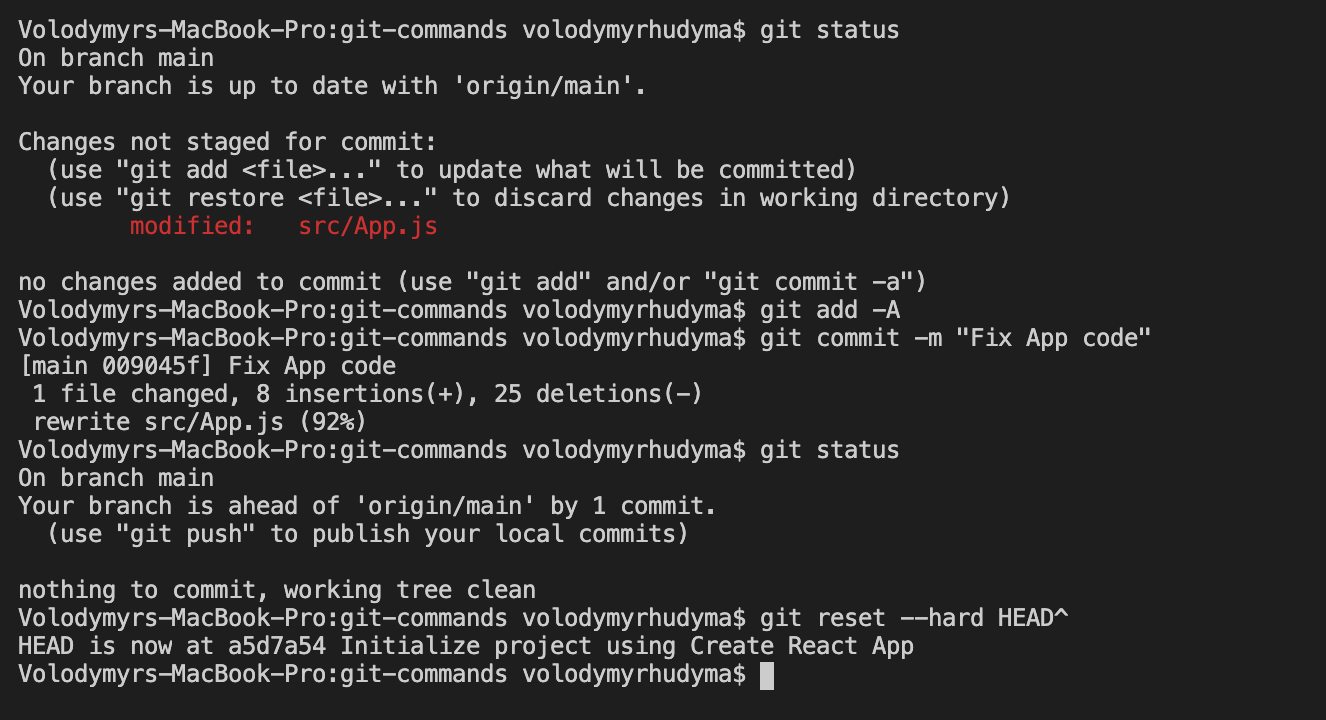 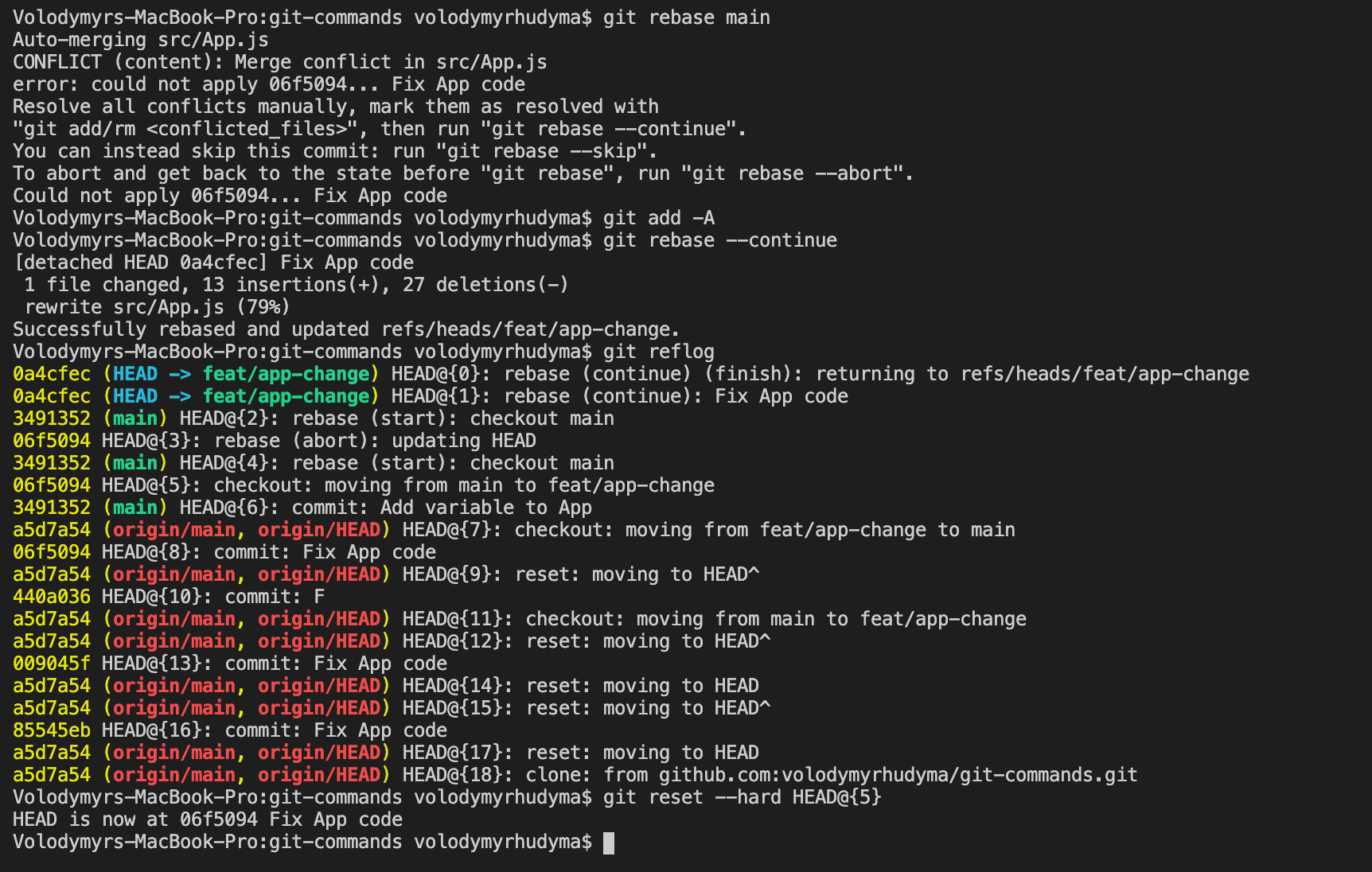 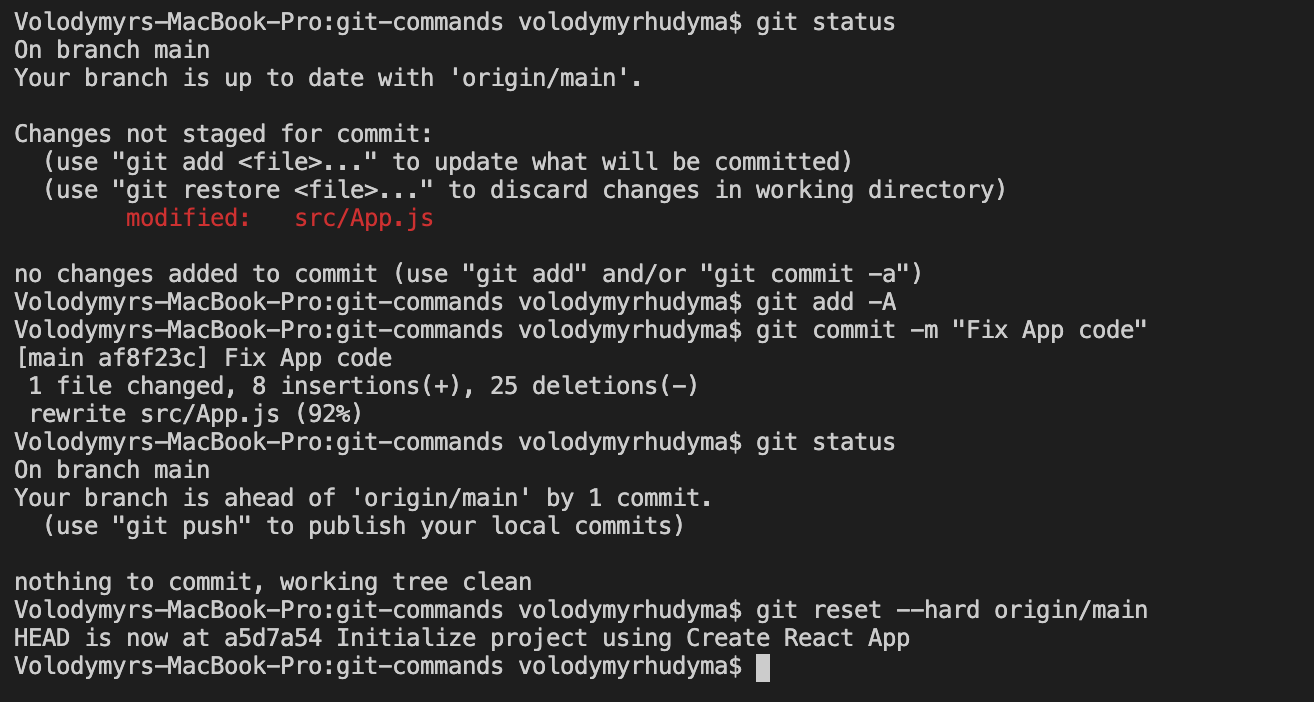 This command is used to join two or more branches together.

Imagine you are developing a feature on a separate branch and in the meantime. the main branch has been updated by a team member with the changes you need.

Then the main branch needs to be merged into the feature branch:

This creates a new merge commit containing the histories of both branches: 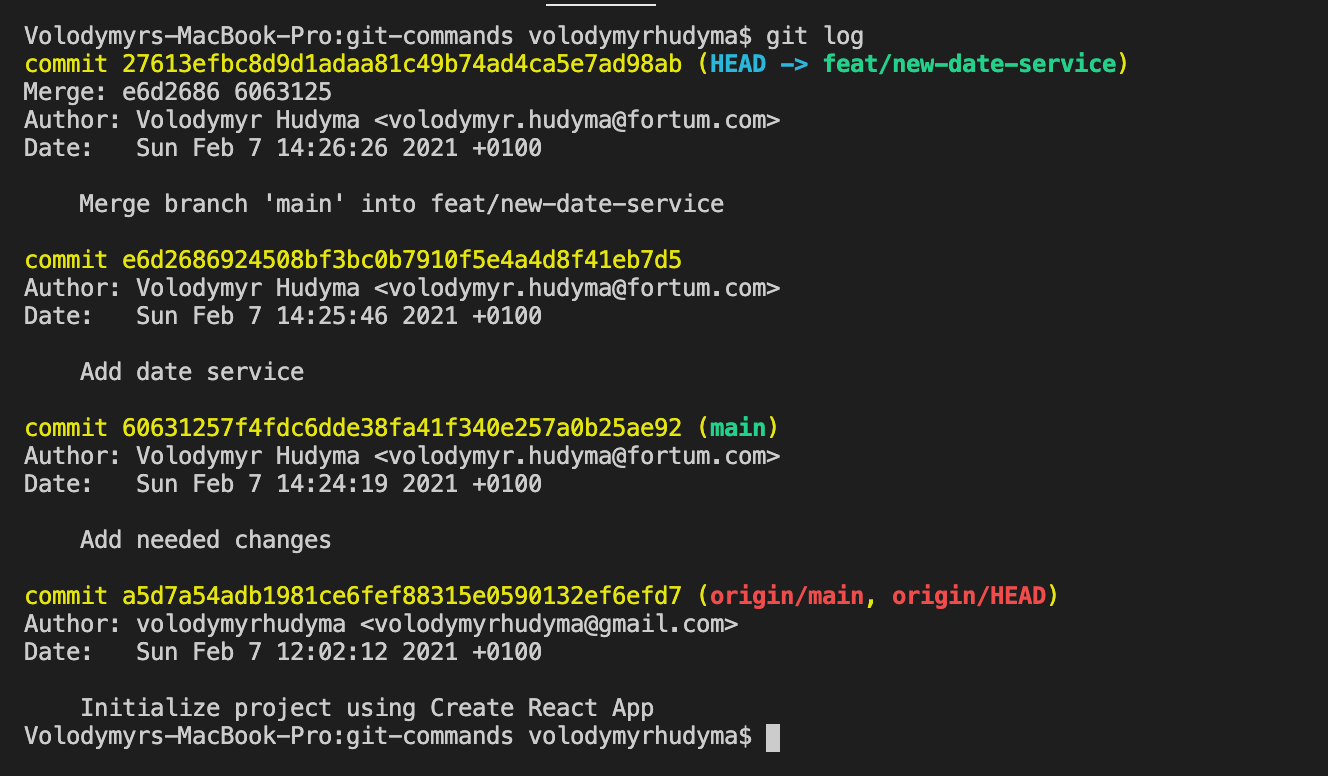 To ensure that the history is preserved, let's check the histories of both branches before merging.

Note that the commit hashes are not changed after the merge (they are still the same ...7d5 and ...e92 for the "Add date service" and "Add needed changes" commits, respectively).

This command allows two branches to be merged together, just like git merge with some important differences.

Rebase the feature branch to the main branch:

Rebase rewrites the commit history by creating entirely new commits for each commit in the original branch:

To ensure that new commits were created in the original branch, let's check the histories of both branches before rebasing.

Note how the commit hashes for the original branch were changed after rebase (from ...17d to ..ce6 for the "Add date service" commit).

One of the biggest advantages of using the rebase strategy instead of merge - is a clean commit history. 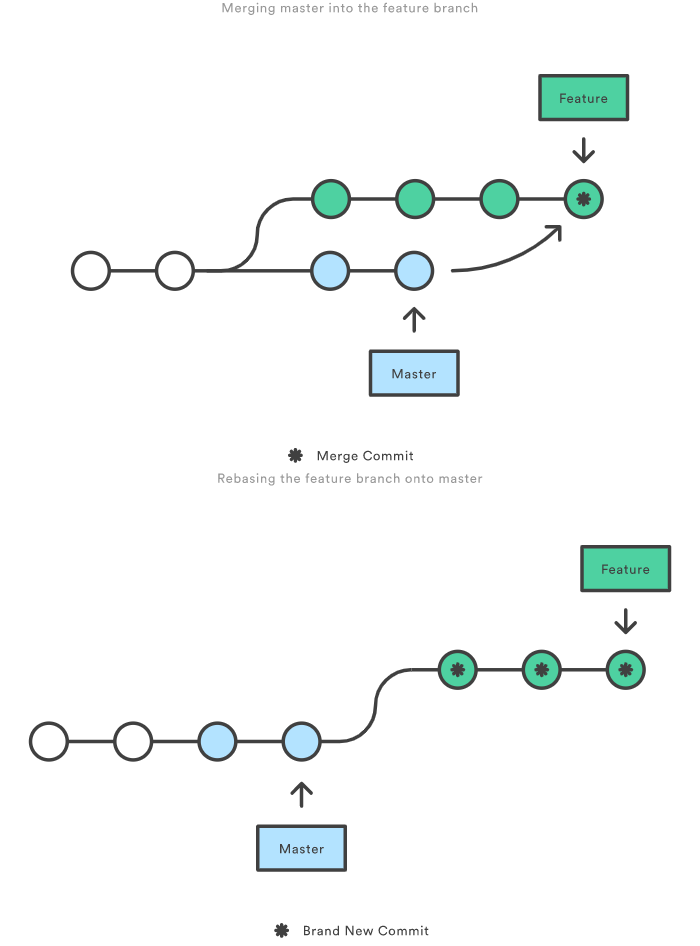 Merging and rebasing are both intended to apply changes from one branch to another, however, there are some important differences between the two commands.

They do their work in different ways.

As mentioned earlier, one of the biggest advantages of using the rebase strategy instead of merge - is a clean commit history.

The second major advantage is a linear commit history, as seen in the image above, so it is easier to read the commit history with git log.

But you need to be careful when using rebase, as overwriting the project history can break your collaboration workflow.

Remember the Golden Rule Of Rebasing - never do it on public branches.

Read more about the differences between merge and rebase and the golden rule here.

This command tracks when Git references have been updated locally.

Reflogs are useful in various Git commands, to specify the old value of a reference.

For example, HEAD@{5} means "where HEAD was five moves ago":

Let us try to read a reflog above:

Imagine that the rebase was done unnecessarily for some reason, so now it is necessary to restore the branch to its original state.

If you have the branch untouched on the remote, you can safely reset it:

But what if the branch exists only locally?

You can find a reference value before starting the rebase and reset to that point in time (HEAD@{3} for our example):

Voila, you have just learned how to undo a rebase.

Git is an extremely powerful tool and offers us a lot of possibilities.

There are many more important commands that every developer should know, but today we learned about some of the most popular ones (I use almost all of them daily!).

I know all of these commands are overwhelming at first, but with a lot of practice, you will eventually get good at each of them.